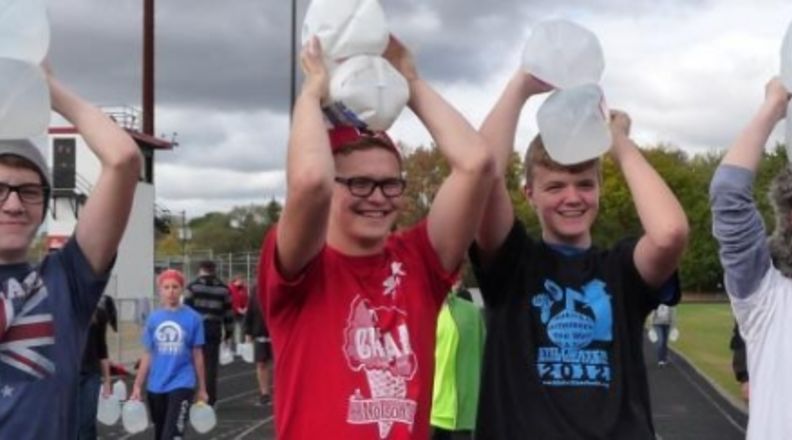 The Lost Boys of Sudan are 27,000 boys orphaned during the 2nd Sudanese Civil War who undertook a harrowing journey to refugee camps in Ethiopia and Kenya, surviving separation from families, war, hunger, wild animals and disease. In 2001, 3800 Lost Boys of Sudan were resettled in the U.S.

Our project began in 2009 with a grant from The Partnership Plan to purchase copies of They Poured Fire On Us From the Sky, a Lost Boy memoir, and host one of its authors, Benjamin Ajak. A chance meeting in San Diego planted the seed for our partnership. When Patty Hall of H2O for Life learned that Benjamin would be speaking in Stillwater, she contacted teacher Sara Damon and suggested that Benjamin’s visit could be an opportunity to help bring clean, safe water to South Sudan by raising funds for Water for South Sudan, founded by Lost Boy Salva Dut of Rochester, NY.

After raising $5,000 the first year, our project has grown and evolved with each school year. We have hosted South Sudanese refugees Benson Deng, John Bul Dau, Alephonsion Deng, Moses Joknhial II and Kuoth Wiel. Each shared their powerful life experiences with students in classrooms and with the broader Stillwater community. In addition to hosting guests, we have had the opportunity to Skype with two South Sudanese refugees, Sebastian Maroundit and Buey Tut.

Stillwater Junior High, with the support of our school district and community, has raised more than $80,000 and funded nine wells through speaker events, screenings of the films Girl Rising and The Good Lie, t-shirt sales, an annual Walk For Water, outreach to local churches and service organizations and school-based fundraisers. We’ve even set a Guinness World Record!