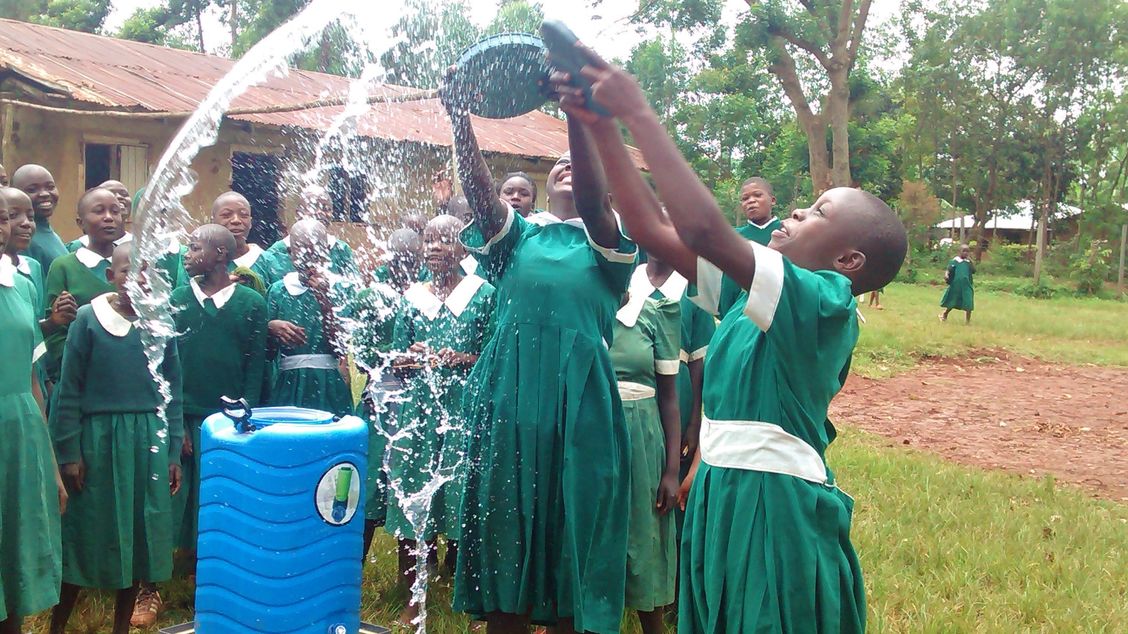 Emurembe Primary School in Kenya now has a new source of safe, clean water thanks to your generous donation. A new rainwater catchment system has been built, and there are now six new latrines being used. Two hand-washing stations have been installed, and students have received training in sanitation and hygiene. Just imagine the difference these resources will make in the lives of these children!

Project Result New Knowledge:
We worked with the headteacher to invite a group of students, teachers, and parents to attend hygiene and sanitation training. Student representatives who exhibit strong leadership among their peers were selected to attend. There was a total of 24 participants who gathered in the fourth grade classroom ready to learn. We taught an entire lesson on management and maintenance of the new tank and latrine facilities. Regular checking and cleaning of the gutter system is a must! It’s also important to treat the water while it is still in the tank. We also covered topics including but not limited to:


Demonstrations were used for hand-washing, tooth-brushing, solar disinfection, and many other topics. We facilitated group discussions and presentations, and students took part in role-plays. The students also received handouts which will help them teach hygiene and sanitation to their peers. The CTC club will include both students and teachers who want to take responsibility for spreading the message of good health and hygiene among their peers. They will also be responsible for managing hand-washing stations, cleaning latrines, and keeping the school environment tidy. A water user committee has also been formed by parents and school administration, which will be responsible for overseeing and maintaining the new facilities. Mr. Leonard Nyangweso was one of the teachers in attendance. He didn’t only help our facilities teach the students, but he learned a lot himself. “We are a blessed people. I have gathered knowledge that I had never known since my childhood. Learning continues until the end of life on earth, and I’m so grateful that you came with very important knowledge to us. We have not been practicing good health out of ignorance, but now that we have knowledge Emurembe will be a changed school. Thank you for everything,” he said.
Project Result: VIP Latrines:
This project funded the installation of six new VIP (ventilated improved pit) latrines. These latrines are easy to use and easy to clean. And with a rainwater catchment tank, there should be enough water to keep them clean all the time!


Project Result: Hand-Washing Stations:
The two hand-washing stations were delivered to school and handed over to the CTC club. These have been placed outside of the boys’ and girls’ latrines to encourage hand-washing after latrine use. CTC club members will teach other students how to properly wash their hands at these stations, and will make sure there is always soap or ash available. Now the school has the stations they need, and they have the water to fill them! Mr. Omuhindi Onyonyo said, “For the first time our children are using hand-washing facilities which will be filled with water from the tank daily, and it has really made them proud hence boosting their self esteem.”


Parents, staff, and students helped our artisans gather everything needed for construction. All the while, women cooked meals for the artisans, and the school provided accommodations for the artisans during their work.


The process began with our staff and the headteacher moving around the school compound to try and determine the best location for a new rainwater catchment tank. This needs to be the best site with good, clean roofing to catch the rainwater. The only new roof was next to an avocado tree with leaves that could fall on the roof, meaning it would need to be cleaned off every single day. We also feared that the roots of the tree could eventually grow into the tank foundation and cause cracks. The school administration ended up cutting down this tree to create an appropriate place for the water tank.


Rainwater tank construction began with clearance of the site: excavating the soil within the required measurements to make level ground for the tank foundation. The foundation was cast by laying hardcore on a level ground and then reinforcing it using steel, concrete and waterproof cement. As the foundation was being lain, both the drawing pipe as well as the washout pipe were affixed. The wall was built with ferro-cement techniques through six layers. The inner wall was plastered while rough casting was done on the outer part.


After the superstructure had been given enough time to settle, the dome construction followed. The manhole cover was fitted, inlet pipes were connected to the roof gutters, inlet screens, ventilation pipes (breathers) and overflow pipes were all done to standards.


Finally, the catchment area was dug, plastered, and a staircase installed. Drainage was set up there, and then the tank was allowed three to four weeks to undergo complete curing before it was cleaned and handed over to Emurembe Primary School. It already has some water in it!


Heavy rainfalls really interfered with work, to the extent that almost every afternoon was wasted with the artisans having to leave the site to seek shelter. In addition to that, one of the skilled artisans working on the latrines got so sick that he had to leave the site and seek medical attention for three days before returning.


The artisans also needed water for mixing cement. It was hard to see children removed from class to fetch water for construction, but after seeing the completed project they agreed with teachers that it was worth the sacrifice. ”I don’t regret the time our children have spent out of class throughout the construction process, because we sacrificed about twelve days to get a solution that will help us for decades,” Jeremiah Masalia stated.


The headteacher told us another story about how they used to lose students because of their lack of water and latrines. Three children who left have already returned since this project; children who walked great distances to attend a school in Kilingili. “Those children are just neighbors of this school, but they used to walk a very long distance to Kilingili and would even reach that school late, just because Kilingili had new facilities. Right now, they are back because they have seen these same facilities in Emurembe,” said Mr. Masalia. He said he’s received a lot of communication from parents interested in transferring their children over to study at his school. As all of these students have the time and good health to stay in class, their academic performance will improve.

Thanks to the following US schools for raising funds for this project: