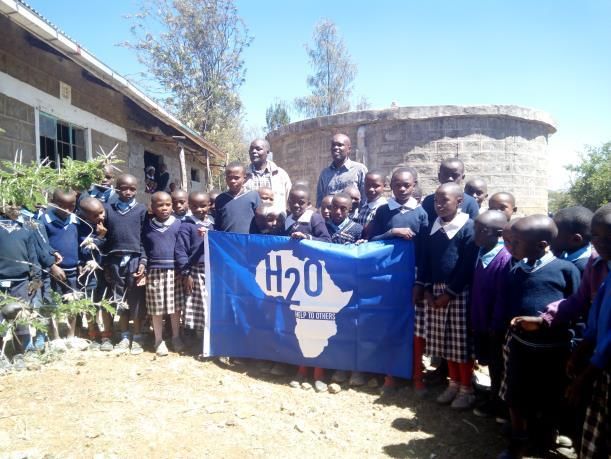 This WASH project has raised the school profile and enrollment has started increasing, since the students in this school will no longer be required to carry water to school for drinking or cleaning, it is anticipated that performance in both county and national examinations will improve.


The following are the main project components:


·         Renovation of 100m3 masonry rainwater storage tank
·         Installation of guttering systems including a foul-flush system
·         Construction of gender segregated improved sanitary facilities (VIP latrines), a block of 8 new units for girls, upgrading of a semi-permanent block of 6 units for girls, and a block of 2 units for teachers
·         Pupils and community training on improved WASH.


A standard water draw-off (hand-washing unit) with two taps was constructed at 6m from the tank to serve the pupils more effectively and reduce damage to the tank by pupils. The tank outlet system was also fitted with a lockable manhole, which also provides the tank drain-off plug – used during periodic tank cleaning.


After renovation of the tank, the guttering system was installed. This involved adjusting the fascia boards made of 8" x 1" timber along the roof edge and fixing new 2m long gutters (4" x 4" x 5" held by metallic hooks fixed on the fascia board. The gutters were laid in such a way to allow the flow/conveyance of water from the furthest end into the tank, through the foul-flash system. The foul-flush system is necessary to allow dirty water from the first rains (after a dry spell) to be diverted from the storage tank, a simple self-cleaning system, to improve the water quality.


The sanitation situation in the school was in pathetic condition with most of the existing semi-permanent latrines (with iron sheets walls and roofs) dilapidated. The latrines were also inadequate which forced pupils especially girls to share the few useable units. The head teacher noted that situation was so bad that that some pupils opted to run to the bush instead of using the dilapidated latrines. The schools also used to spend a lot of money on exhausting service for the shallow pit latrines.


The project constructed gender-segregated VIP latrines for girls and teachers since the boys had a permanent block with adequate units. The parents excavated the pits and also provided locally available materials (rubble stones and water).


The head teacher, Mr. Ndungu said:
We thank God and all parties that came to our rescue, our children have sometime had to go to the bush but now this will be a thing of the past. At Subego Primary School we had a very big tank that was not in use and by the intervention of KRA and their partners H2O for Life our children will not go to the river to fetch cleaning water or carry drinking water to school and there will have enough time to study.
Share: Facebook Twitter Email